Morocco’s coach Walid Regragui said on Tuesday that reaching the World Cup semifinal was not enough for his history-making side and that he hoped to cause an “upset” in their match against reigning champions France on Wednesday. 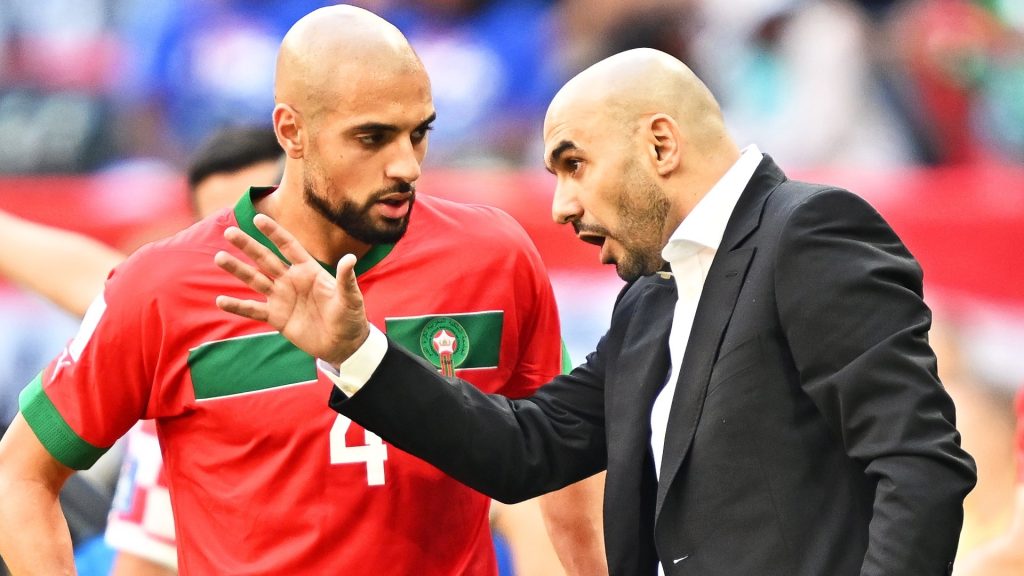 The 47-year-old coach of the first African and first Arab team to reach the last four of the World Cup took full advantage of the chance to address the world’s football press in a Doha auditorium, the day before the clash with Didier Deschamps’ team.

The Moroccan exuded pride, optimism, defiance and humour in a refreshing contrast to the usual drone of non-commital cliches that coaches ritually role out before big games.

He mocked the game’s modern focus on possession, ridiculed the ‘Expected Goals’ stats and laughed in the face of those who wrote of his team before they eliminated Spain and Portugal.

But along with the quickfire responses and talking points, there was a defiant refusal to play the role of the satisfied minnow and an evidently burning belief that his team can beat France and then do it again against Argentina or Croatia in Sunday’s final.

“We want to win the World Cup,” he said, “It’s not just words, we have to go further, maybe we won’t have another opportunity,” he said.

“We are not the favourites but we are confident – maybe that makes me mad, crazy? A bit of crazy can be good,” he said with a grin.

Having already dubbed his team as “the Rocky Balboa of this World Cup” after they knocked out Portugal in the quarter-finals, Regragui was not pulling any punches.

Asked whether his team will continue in the same style, which has seen opponents enjoy plenty of possession, he was unapologetic about his team’s approach.

“We will play to our strengths… this idea of possession, it is amazing how football journalists love these figures about 60-70% possession, but it is no good if there are only two shots on goal,” he said, perhaps recalling Spain’s 77% possession and one shot on target against his team.

“If France give us possession, we will take it but I don’t think they will. So we will try to stop them,” he added.

If Morocco’s application of the well-established strategy of mass defence and rapid counter-attack are not in fashion at the moment, statistics certainly are and Regragui has little time for the focus on numbers.

“Let’s stop with the statistics. I’m going to ask (FIFA president) Gianni Infantino to add points for beyond 60% possession,” he added.

“We had a 0.01% chance of winning the World Cup at the start,” he said before a reporter told him the probability is now rated at 12%.

Regragui suggested that his team was being criticised, in part, for refusing to play the role of the entertaining losers.

“European journalists criticise our style, I think it bothers them to see an African team playing as they do.

“They like to see a dance and see (winger Sofiane) Boufal doing two nutmegs and then going back home,” he said.

Certainly, though, not even the most critical could question Morocco’s determination and work-rate along with their defensive resilience.

“The key for us is spirit, we play a quality game every time with a good spirit. For me the spirit is the most important thing in football – we have to play with the heart and the spirit,” he said.

Born in France, in what he called a “difficult” suburb south-east of Paris, Regragui spent the bulk of his playing career in France before moving to Morocco to coach. He only took over the national team in August.

It has been a short reign so far but his impact – and that of his team – has been enormous, resonating well beyond Morocco.

“If we can make young people dream and present as positive image of Africa, the Arab world and our religion that is great,” he said.

But what clearly is driving Regragui is the satisfaction of surpassing all expectations and defying sceptics.

“Before every round people thought we would get knocked out,” he said.

“But we are still here and we are going to fight to the end.”

Drama as Kajala refuses to return Harmonize's car after break-up

8 people dead, 20 injured after trailer rams into matatus in Nakuru