Arimis has been topping the trending charts in the Kenyan interwebs since last year.

The founder of Arimis came up with the idea in 1983. 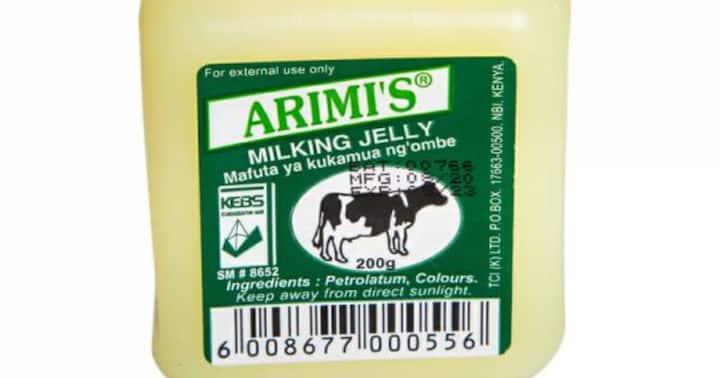 This followed the circulation of images that suggested the Arimis milking jelly would soon adopt a new look.

The images were received with disdain by Kenyans who said they preferred the traditional look, which has a Friesian cow on the label.

This forced the company to clear the air, saying it was not planning to rebrand, clarifying that the images in question were just a suggestion by a random Kenyan.

However, did you know where the name Arimis came from?

The name was coined from the Ameru language, “arimi”, which refers to farmers.

Its founder, Hanish Shah once said he conceived the idea after witnessing the difficulties small scale farmers were going through while milking their cows.

It was first produced in 1983 in the now Meru-county.

In 1985, the product got to Nairobi and was later spread to other parts of the country.

For over 30 decades, Arimis has been a Kenyan farmer’s trusted companion especially after dairy farming became a commonplace occupation for many.

The milking jelly was originally purposed to be used by farmers, but over the years, Kenyans spotted a cool skincare agent in it.

However, customers use it for skincare given it is made from raw materials believed to be safe for the skin.

The product has not been rivalled for the years it has been in the market until recently when Menengai, a Nakuru-based edible oils manufacturer, came up with its own version.

As reported earlier, the company shot down claims that it was changing the look of the product.

Taking to its official Facebook page, Arimis Kenya said the circulated photos were a suggestion by a random Kenyan who would like to have the company buy into it.

“We are not rebranding. To all our esteemed customers and users of our products, we’re not rebranding, the circulating brand is just someone’s suggestion. We stick to our initial brands! Otherwise enjoy the greatness of your skincare,” the company said.

Grace Ekirapa showers daughter with praises as she cutely swims