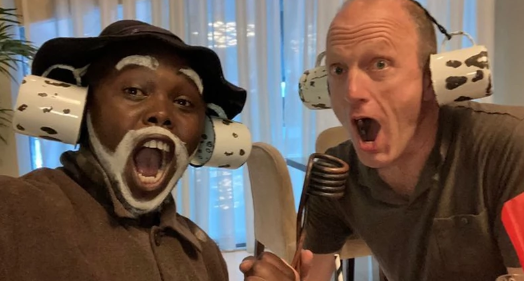 The famous commentator is also in Qatar for the international championship, along with the content maker who gained notoriety for lip-syncing Drury.

Arap Uria snapped a picture while holding a poster with a message he hoped would reach Drury on the streets of Qatar in an effort to get the commentator’s attention.

Donning his signature look that catapulted him to fame, the content creator held a placard with that read:

“Hello, Peter Drury, it’s Arap Uria. I am in Qatar and I would like to meet you.”

Jim responded, wishing Arap Uria well and letting the content creator know that the message was home with the poetic commentator.

“I have passed on your tweet to Peter. I hope it all works out for you. Good luck,” Jim replied.

True to his word, Arap Uria finally met Drury today and could not hold back the excitement.

The content creator shared their photos with a caption that read:

“Gooooal!!!😂😂 Finally with Peter Drury . Many thanks @jimbeglin”.

In some of the photos shared, the duo was seen donning Arapa Uria’s tools of trade that have become part of his signature look.

Some netizens were however not impressed with the strategy that yielded the meeting with Drury with some faulting the Kenyan content creator and pointing out that there are other ways to secure a meeting.

“Please stop this. You are only shaming yourself – your dignity. There are many other ways to find Peter Drury.” Quipped Farah Ali.

Others noted that Arap Uria was simply plying his trade of creating content and saw nothing wrong with his plea to Drury.

“You are behind, Peter recognized him long time ago. Peter actually told him that he hopes they will meet one day. Relax isikuwashe” Wrote @Jessca Kosgey.

“To the haters, Drury is a world icon. Arap Uria uses his voice to create content. Now he will meet the guy, possibly do a skit together. Drury’s followers will now be Araps follower. The guy is going global. Keep begging Arap. If it is what it takes. 💪🏾💪🏾💪🏾” Added @Mwaura 24.

The duo is among thousands who are in Qatar for the ongoing FIFA 2022 World Cup.

Actress Bwire Ndubi: How I Met My Husband During Acting