Many Kenyans are upset by a video showing a mother-in-law dancing and hugging her supposed son-in-law. 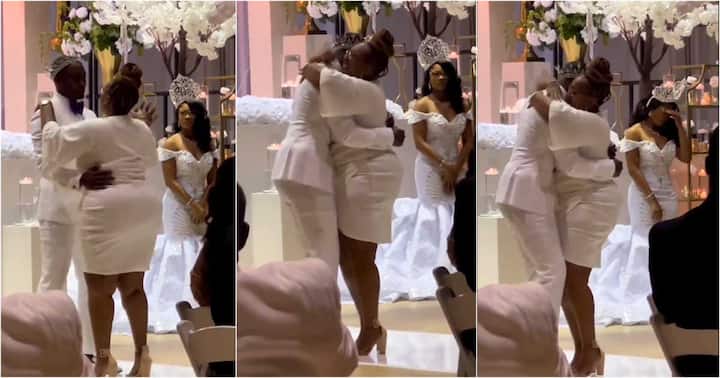 The two were shown in the widely shared social media video holding hands at her daughter’s upcoming wedding.

The mother-in-law wore a white outfit, and the groom was dressed in an all-white suit with a crown.

The well-endowed woman danced close to her son-in-law while they locked eyes.
They moved rhythmically to the music, and at one point she pulled him in and gave him an embrace.

In the distance, the bride, who was decked out in a stunning white dress and tiara, appeared apprehensive.

The young lady was unhappy and appeared uncomfortable as she watched her mother dance with her new husband.

When her mother pulled the groom closer, the young lady held her head in exasperation.

Many Kenyans found the clip quite disturbing, given the respect mothers-in-law are accorded in many Africa societies.

Here are some reactions from Kenyans;

Kamenegoro: shelmie_muliro: “You just walk out respectfully and go to 1824 for shots.”

_.chilababy: “The bride is jealous.”

bluetooth.__: “He will eating the chick and the chicken.”

Sellyleila: “Take his father or brother and join the dance floor, copy each and every move see how many seconds that groom will take before switching partners. This lady should come to Nairobi for lessons on survival.”

i_amkabugi: “Bride is having a one night stand literally.”

Zuchu officially confirms she is in romantic relationship with Diamond