Mercy Masika, a gospel performer, has surprised her fans by revealing a fondness of savory frog meals. 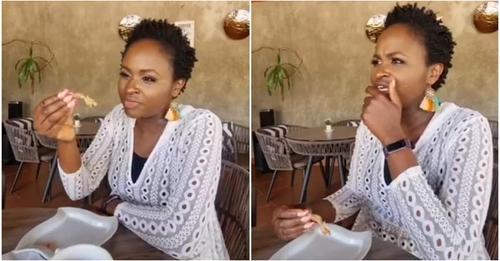 Fans of the happily married gospel singer were curious as to how she persuaded herself to sample the strange food.

While in Lubumbashi, the singer ate a frog dish that had been made by a trained chef.

When they placed their order, her pals dared her to try it out, but she was hesitant at first.

“We need to rear frogs in Kenya. Tried some frog legs in Lubumbashi today and they taste like fish.” Mercy noted that she did not think about what it is but rather enjoyed its niceties. ” I ate six legs. I just stopped thinking it’s a frog.,” she said.

Her followers were astounded that she found the food to be excellent and compared it to a fish.

Mercy noted that she did not think about what it is but rather enjoyed its niceties.

“I ate six legs. I just stopped thinking it’s a frog.,” she said.

These are what her fans had to say:

Dorcus Dorcus said: “Are you sure you ate it mercy ju Mimi na wahala dey here.”

Riek Machar said: “Mercy Masika one man’s meat is another man’s poison could be my defender in that hotel ,then I order for ugali mrenda served with fried omena . The frogs I am sure can even surprised the worms in our stomach.”

Emmanuel Momanyi said: “Mercy Masika being a christian, i think it’s wrong to eat frogs, God did not commision us to eat those creatures and so you can’t advocate for their eating. I like your work in the ministry so do the right thing momma.”

Winnie C. Rono said: “Mercy, yani kabisa. Now you need to help them come up with a fancy/enticing name for it on the menu.”