Dorcas Kagendo, a former millionaire who is now 50 years old, has pleaded for well-meaning people to help her. 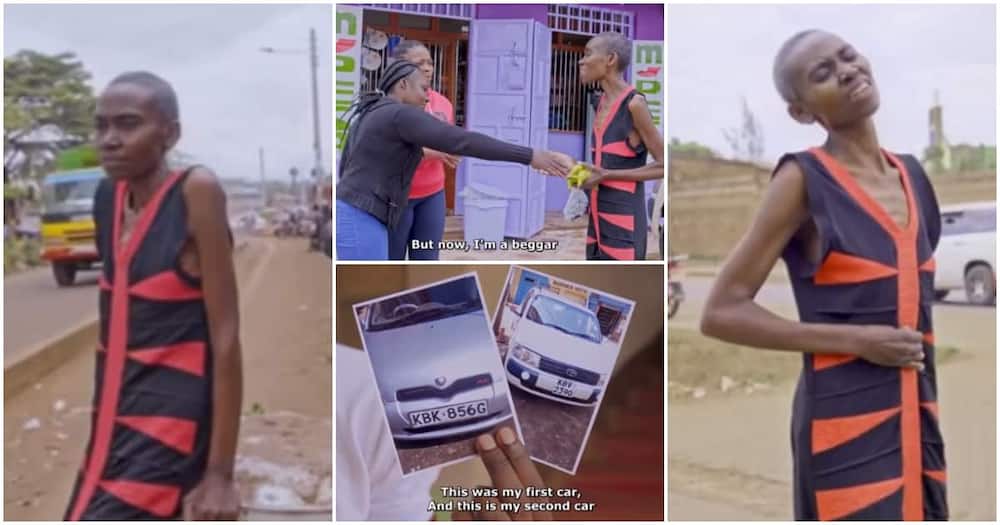 The Kenyan woman from a dysfunctional family found professional success in her thirties, grew wealthy, and now owns homes and vehicles.

Despite coming from a dysfunctional household, Dorcus Kagendo managed to succeed in her thirties.

Afrimax learned how Dorcas became wealthy after seeing her begging for donations on the street.

She was raised by her mother; she has never met her father.

“I was not shown my father. My mother denied to show me my father.”

After she graduated from school, she worked hard and first got a job as a secretary and then as an office administrator.

From there, she began earning millions. At 33, she was a millionaire and bought lots of vehicles. She also bought lands, houses and other properties.

She got married and had a kid but was abandoned by her husband later on.

Pictures of her cars were held up in the video as well as how she looked when the going was good.

Dorcas said problems started for her after she got a job abroad. The mouth-watering job required her to travel to Saudi Arabia.

Owing to this, the lady left her baby in the care of someone and flew to Saudi, but fell ill days into her new job.

She began suffering from different ,diseases including kidney failure, diabetes, lung problems and cancer. The nature of the job wasn’t disclosed in the course of her interview.

Due to the diseases, she returned home and sold her properties to afford treatment for cancer and the rest. This is what rendered Dorcas poor, with her family members deserting her.

Here are some reactions from netizens:

Timothy Mwaura said: “So heartbreaking it’s amazing how people surround you when you have money but when it’s gone they will not even pick your calls more so your relatives. Our health care is in total mess being sick in kenya is almost a death sentence. What I can tell my sister here is put your hope and trust in God he will never fail you.”

Lillian Mandauka said: “My dear Dorcas, we have a living God, there’s no disease that he cannot heal. All things are possible with God and He makes a way where there’s no way. Trust and have faith in Him and speak positive of your life in the name of Jesus Amen and Amen God loves you my sister.”

Wendy Free said: “God bless her. She is such a humble and caring woman. May the Lord heal her body and remove every infirmity right now in the Mighty Name of Jesus.”

I Am Winning Right Now! said: “Life can change in the blind of an eye. Moreover, illness can be like a thief in the night. It will rob you of everything you have. I pray you get the help you need. Blessings!”