On October 6, the newly elected Azimio MP expressed regret over being insulted by Duale’s criticism after his remark about “madam speaker sir” sparked commotion in the National Assembly.

Aden Duale respect me please !!!!you only shout in parliament nothing else .Infact you can bring more problems in our defense forces than stability we are experiencing now in our country @NAssemblyKE @WilliamsRuto @RobertAlai @HonAdenDuale @Senate_KE @Kenyajudiciary pic.twitter.com/OdmrIhQyix

Salasya’s speech, in the opinion of Duale, who is currently the Garissa Township MP, fell short of the standards expected in a parliamentary setting.

“The honourable member who has been nominated as a CS is now calling me a joker. Even from the look of things, he stated that he wanted Kenyan troops to be removed from Somalia.

“You are not qualified to be the CS for Defence and I want to tell you, for free, that I will be the first person to grill you in Parliament,” Salasya stated, adding that the questions he would table during Duale’s grilling would prove his worth in Parliament. 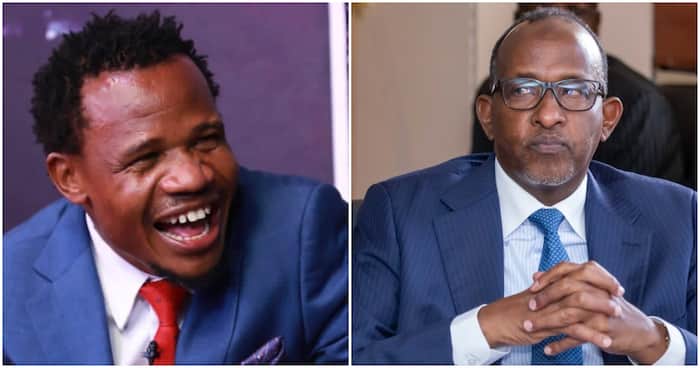 He further termed Duale to be a noise maker on the floor of the house unworthy of criticising his maiden speech.

While presenting his arguments in the National Assembly which was discussing President William Ruto’s address, Salasya called for leniency and patience, lamenting that he would strive to catch up with seasoned lawmakers.

Duale, however, claimed that the MP struggled with adhering to the Standing Orders, prompting laughter from his fellow lawmakers.

“This is serious, can’t be the August House. Mungu saidia,” Duale commented after Salasya referred to the deputy speaker, Gladys Shollei, as a madam speaker sir.

The MPs opposed Ruto’s Cabinet nominees, arguing that a majority had pending legal cases in court.

Ruto rewarded his allies who stood by him after he was kicked out of government. Other than Duale, he appointed Alice Wahome as Water CS, Kipchumba Murkomen (Transport), Moses Kuria (Trade) and Abraham Kithure Kindiki (Interior).

List of Kenya's ratchet musicians who ended up as pastors

Pastor Dorcas Rigathi: How I rose From being house help to Deputy President's wife