Amou Haji, a 94-year-old Iranian man who was also known as the “world’s dirtiest man,” has died. Haji passed away on Sunday in the village of Dejgah in the southern province of Fars, according to the Irna news agency.

According to an official in the area whom the agency mentioned, Amou Haji had refrained from taking a shower for fear of “becoming sick.” 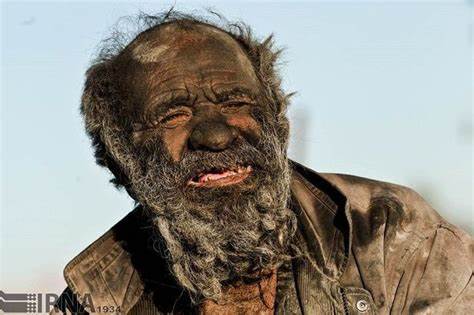 The report went on to say that “for the first time a few months ago, villagers took him to a bathroom to wash.”

According to some reports, the locals in the area thought the hermit had experienced “emotional difficulties in his childhood,” which may have caused some form of trauma that caused him to refuse to wash.

Local media claimed that Haji, who was covered in dirt and lived in a cinder-block shanty, hadn’t taken a bath with water or soap in more than 60 years.

He refused to wash because of “mental challenges in his youth,” according to the villagers. According to the Tehran Times, Haji would eat roadkill and smoke from an animal excrement-filled pipe because he believed cleanliness would make him sick.

He was captured on camera puffing on multiple cigarettes. Irna stated that a few months ago, villagers had finally convinced him to wash.

After Haji’s passing, an Indian man can get the unofficial title of being the “dirtiest” person in the world.

According to a 2009 article, Kailash “Kalau” Singh of a village outside of Varanasi, Uttar Pradesh, has chosen to abstain from bathing for more than 30 years in order to put an end to “all the problems confronting the nation.”