Vera Sidika, a socialite, has admitted to having two nannies working at her Nairobi house.

When asked how many nannies she had during a fan Q&A on Instagram, the entrepreneur, whose first child would turn a year old on October 20, 2022, replied that she had two. 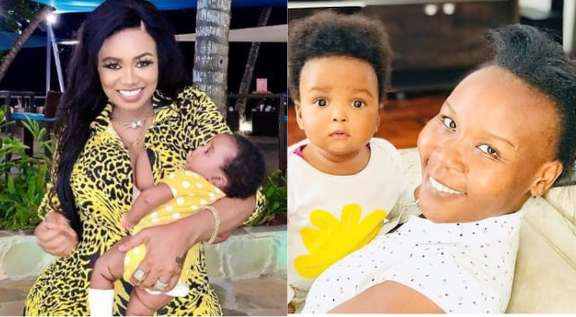 Vera stated in January that those over the age of 40 should work for her and that they shouldn’t use social media.

“I prefer over 40-year-olds because they are the best. These 20-something-year-olds aren’t my style. I pay her (nanny) over KSh 40k.

When asked by a follower if she intended to bring her daughter Asia Brown to Disneyland, she responded:

After giving birth last year, the socialite revealed she would want to have five children with her lover Brown Mauzo.

Asked which is her favourite country, she said:

“Have you ever tasted mutura?” another fan asked.

The 33-year-old recently released a new song after using her body to clout chase, and it is the current most disliked song on YouTyube in Kenya, with over 11k dislikes.

In July, Vera shared cute videos of her father teaching Asia how to walk, and she was excited.

“The bond between Asia and her grandpa is unbreakable,” she captioned one of the videos.

She also shared a video of her daughter refusing to leave with her and clinging to her grandfather. At some point, the cute baby girl almost cried.