A police officer’s kind act to a stranded new mother at the Kapsabet Referral Hospital revived hope in human kindness.

Kenneth Kapelel, who also serves as the Kaimosi Police Station’s driver, was present at the hospital where he had brought victims for urgent care. 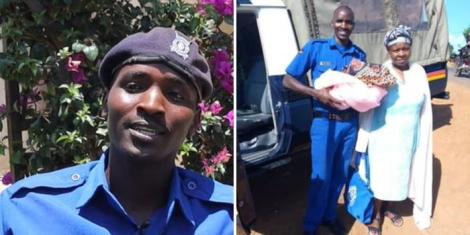 The police constable was caring to several patients when he saw a tragic event.

Sitting on the hospital floor with little to no hope was a mom holding a newborn child in her lap.
Kapelel went up to the new mother and struck up a chat since he was moved and worried.

“At the hospital, we had to assist as we waited. I noticed a woman seated on the floor with her child because all the hospital beds were full.

“After talking to her, she told me she had a Ksh640 hospital bill and was in the hospital for six days,” he narrated.

Before taking the woman to her home in Kipsugur, Kapelel stepped up to the hospital cashier and paid the hospital cost for her discharge.

The officer’s generous act again astounded the hospital staff. According to reports, the cop once paid a casual hospital visit and gave blood to a victim.

“They say service to humanity is service to God. as a police driver you interact with a lot of people. The role of a police officer is to give back to society,” he explained.

He also earned the moniker “doctor” after once assisting a woman in Turkana with childbirth.

Conflicting opinions from the officer’s superiors, who accuse him of abdicating his responsibility and abusing police cars, have been one of his difficulties.

“I was raised by a single mother, and my father was killed by bandits. Growing up we lived on handouts from people that is why I give back to the people. I have the heart of giving,” he stated.

Before his recruitment to the force in 2012, the officer also singlehandedly helped reconstruct a road that was destroyed by the rains.

He attributed his success in joining the service to prayer and blessings by the village priest, who wished him well after he reconstructed the road.

Kapelel wishes to construct a retirement home to help the old in society in future.