If there is an area that is known for cold weather in Meru, it is Kiirua-Naari ward in Buuri sub-county.

Driving along the Meru-Nanyuki road, you will encounter lush vegetation near Kiirua market, with sprinklers raining irrigation water on thirsty soils. 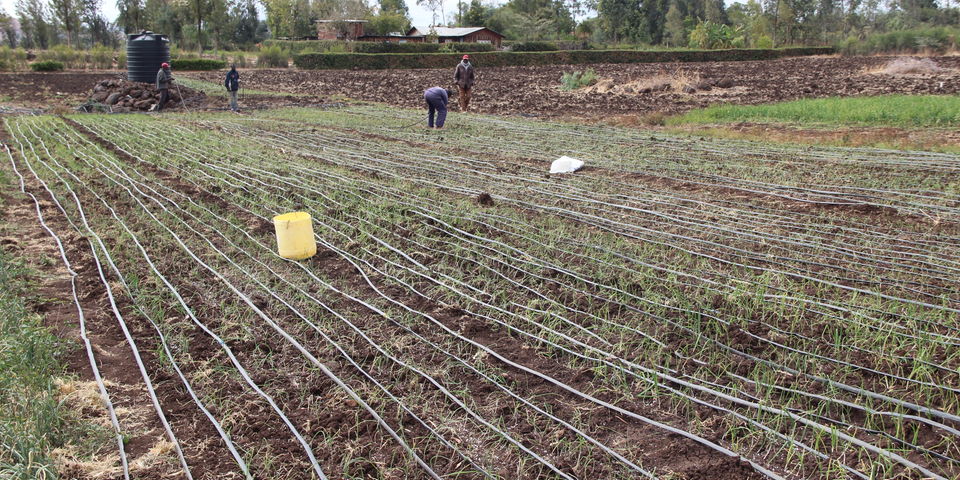 But beneath this veneer lies one of the most remote areas in Meru –Naari is a cold desert where rains are scarce.

The semi-arid area experiences cold spells most of the year, with an unpredictable rain pattern. When it rains, it pours and when it doesn’t, drought goes for as long as three years, as is the situation currently.

A farmer at Kiirua Irrigation project shows her produce. The farmers are reaping huge returns from irrigation farming.

Crops rarely reach maturity and in most cases, farmers are left clutching on hope that the gods will open up the skies and pour down some water. It never happens, leaving their withering crops to dry up and a poor and desperate population begging from neighbours while the government comes to their aid with relief food. 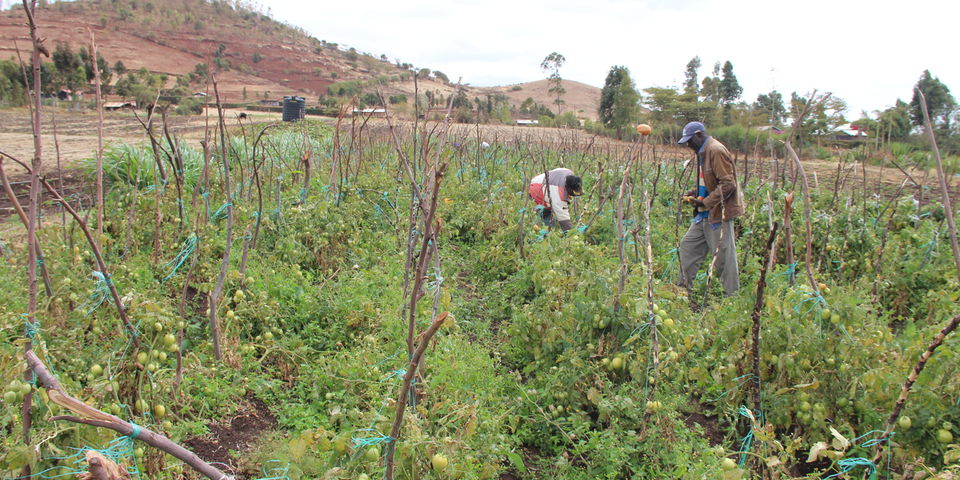 Walking along dusty paths on this July morning, the harsh cold weather is evident. There are swaths of dry bare land, dotted with acacia trees and shrubs with undulating hills in the backdrop.

But you encounter an oasis here and there, where farmers are engaged in horticulture farming. Naari village has finally sprung to life, thanks to an irrigation project that was conceived some 14 years ago.

Until March this year, Mr Patrick Mwenda was a truck driver, shuttling between the Mombasa port and Kampala, Uganda. During his 30 years in that business, starting with a salary of Sh10,000 and finally earning Sh30,000 a month, he also delivered goods to clients in Dar es Salaam, Tanzania.

When he was informed that the Kiirua Buuri irrigation project had finally materialised, Mr Mwenda quit the job and retreated to his village to concentrate on farming.

He has no regrets. Last season, he planted tomatoes on half an acre and with the good prices prevailing at the time due to the biting drought, he raked in Sh520,000, money he had never seen in his entire life.

“I was shocked. I asked myself, ‘Is this my money or I am dreaming?’… Within three months, when I would have earned only Sh90,000, here I was with loads of cash. I decided this is what I want to do the rest of my life,” said the 50-year-old father of four, adding that he has put the crop on a similar plot and projects to earn Sh300,000.

Mr Mwenda’s story is replicated in this village where 2,500 members of the irrigation project are scooping cash from the soil or picking it from fruit trees.

It all started in 2008 when, tired of relying on rain-fed agriculture, villagers decided to establish an irrigation project.

They started contributing money for the project, but they faced challenges including lack of commitment among sceptical members and alleged embezzlement of funds by officials of the group, said Mr Kinyua Ikabu, the chairman.

They raised Sh35 million and built an intake on the Kathita River in the Mt Kenya forest, but then the cash ran out. In 2015 they approached then Meru Governor Peter Munya, now Agriculture Cabinet Secretary, who helped them negotiate a loan of Sh280 million from a commercial bank. But this plan hit a brick wall when the bank demanded a cash guarantee of Sh50 million.

“The county could not commit the cash to lie idle, so the plan did not succeed. At this point we got stuck and some people who had initially opposed the idea thought we had reached a dead end and fell off … but they are now regretting it,” Mr Ikabu said in an interview at the project’s site office.

However, he adds that the disappointment was a blessing in disguise. They approached the National Irrigation Authority (NIA) with the help of Public Service and Gender Cabinet Secretary Margaret Kobia and presented their proposal.

“Reflecting back, I think it was good that we did not obtain the loan because the project would have been too expensive for farmers. Part of the agreement would have involved us collecting Sh500 from each member monthly, which would have been difficult,” said Mr Ikabu.

Mr Gitonga Mbijiwe, NIA regional coordinator for Mt Kenya East, which also includes Isiolo County, said after they carried out a feasibility study, the authority established that the project was viable.

At an estimated cost of Sh284.2 million and a plan to irrigate 1,250 acres of land, the project would benefit farmers growing horticultural crops including potatoes, tomatoes, cabbages, garden peas and green maize and indirectly benefit 12,500 residents.

“The study established that the crops would have a value of Sh356 million per year and given the cost of the project, the return on investment would take just two years to recoup. The project would also contribute to food security and nutrition in the Big Four agenda and create jobs,” Mr Mbijiwe said.

During the handing-over ceremony on July 7, when the project committee took over from the contractor, there was jubilation as residents celebrated the end of their decades of misery.

“This is the first time we are seeing some life in this village and we will strive to ensure that we are self-sufficient in food production as we earn a living,” said Ms Florence Muriithi, who is using the water to grow Irish potatoes.

Last season, Ms Muriithi earned Sh80,000 from her one acre after planting potatoes and carrots, and expects nearly the same amount this season. Initially, her farm would fetch her less than Sh30,000 per season, which was also dictated by availability of rains.

Mr Samuel Inoti, who is irrigating his fruit trees including macadamia and avocados, says after the arrival of the commodity, life has changed. “I have 40 avocado trees and I used to buy water at a cost of Sh5,000 each month to water the trees, which was not enough. With this project, my trees are healthy,” he said.

Mr Inoti said that with water now readily available, his avocado trees would produce at least 1,000 fruits per year each, and with each fruit going for at least Sh15, this would earn him Sh600,000.

The project has also led to appreciation of land values in the area, with an acre now selling for Sh1 million, up from Sh500,000, according to Mr Ikabu. But he added that the project still faces challenges as not all members have been connected to the precious commodity.

“We still have 1,000 members who are yet to start enjoying the benefits and we are trying to raise at least Sh40 million that will solve the problem for good,” he said.