Roots Party leader George Wajackoyah has revealed that he found out about his wedding day on the actual event day after his wife Miller Lee Chatham organised everything without his knowledge. 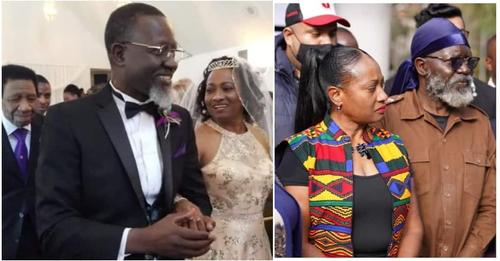 In an interview with Obinna on his YouTube channel, Wajackoyah gave details of how his wedding went down.

“Nilipigiwa tu simu hapa, and you know when my wife talks, I look down because she is my queen. You know she drags me to the church whenever I go there because she is a choirmaster in the church. She was born in the American baptists church, It’s a church family and I am a Hari Krishna,” he said.

The presidential hopeful said that at that particular time, they went to visit Hawaii and came back and in the morning, he was told they needed to go to the airport.

“We go to the airport, naona our children are coming in. Our kids live in the UK and we live in the US. My kids also did not know why they were coming, but she had already taken measurements of their suits,” he said.

According to Wajackoyah, his wife told him they were getting married on the day of the wedding.

“Nilifika pale, ile kitu ilikua the worst thing I have ever seen since I was born ni kuambiwa you can now kiss the bride. Nilikataa. Ati nifungue mdomo yangu, bibi yangu afungue mdomo yake, mbele ya watoto wangu, niliambia priest in African tradition we don’t do this in front of people,” he said.

He said the church was full of people, and he could feel himself dying on the inside.

In a separate story, Wajackoyah did not participate in the presidential debate, his gorgeous wife left heads turning.

Right from her Ankara cover-up, and her chic ponytail hairdo to her support for her husband, Miller stole the show and warmed hearts.

Kenyans were also especially elated to set their eyes on the lovely woman as she has been away from the public limelight.