Former model Emma Too has come out swinging, claiming to be the woman Trevor Ombija was referring to and accusing the newscaster of having a mumama.

A video of Trevor discussing how he promised to soundproof the home of a particular renter who had been pestering him about the noise issue went viral. 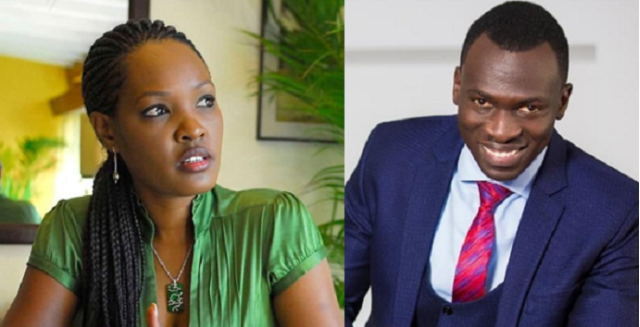 Trevor was speaking at a meeting to resolve a noise complaint raised by locals and business owners in the upscale Kileleshwa neighborhood regarding his opulent restaurant, Samaki Samaki.

The media celebrity stated that the woman in question was berating him only because he refused to award her a contract for gardening.

After the video went viral, Emma released videos of how Samaki Samaki’s music fills her home and screenshots of conversations she’s had with a woman she believes is the restaurant’s actual owner.

Emma claims that a woman by the name of Vanice Morwabe is the actual owner of the business.

Emma responded to Trevor’s post on Twitter as well, but she avoided using his name and occasionally just called him Noah.

” I’m truly the wrong lady to intimidate! I’m not even shocked that’s how he thinks he can solve this! I have been very clear about what they should do! I never address Noah, I address the real owner!,” part of Emma’s tweet read.

“How do you soundproof a split-level house and not the actual club? What will other residents do? Will they also soundproof the whole street? Turn down the music and stop parking at my house!”

This is deep inside my house!!!!! @NemaKenya @NMS_Kenya @SakajaJohnson @RobertAlai
Now how do you soundproof a split level house & not the actual club?! What will other residents do? Will they also soundproof the whole street? Turn down the music and stop parking at my house! pic.twitter.com/bcTlF8C52z

In her final statement, Emma said that she had made an effort to be amicable because a woman owned the business and she was attempting the entire “women supporting women” concept.

“I have been very consistent in my cry about the said establishment and I have never attacked them or even said the name here. The reasons being it is a woman-owned business which I guarded and wanted her to do the right thing,” she noted.

I didn’t want to go this far, but if this can dispel the notion my fight to stop Samaki Samaki noise pollution, when I said I have been patient and lenient, this is part of my communication with the owner, as I said I thought she was a decent person. How is this for vindication?! pic.twitter.com/xnYqEDGHcf

Emma’s tweets have received no replies from Trevor or the mystery woman.

It’s interesting how Emma’s charges line up with the rumors that have been circulating since June of this year that the woman is the mother behind Trevor’s extravagant lifestyle.

The journalist, however, has previously stepped forward to refute the claims.