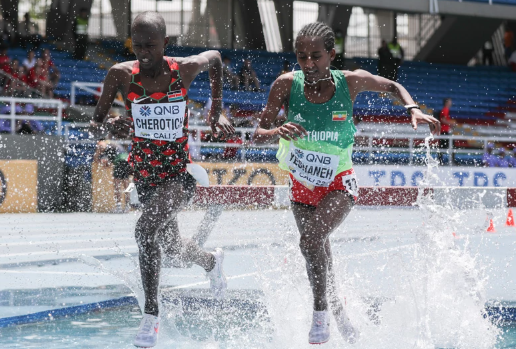 Just like in the semi-finals, Cherotich took control of the race from the get-go. The opening laps saw Cherotich control the pace of the pack dominated by Ethiopians as well as compatriot Pamela Kosgei.

It seems the student from Kalyet Secondary School in Kericho County, was inspired by 800m World Record holder and Olympic champion David Rudisha who also led from gun to tape in the 2012 London Olympics.

Cherotich after four laps pulled the field around behind her, like a hen leading her chicks. The pace at times was so ferocious to an extent some athletes could be seen gritting their teeth.

After crossing the finish line, the teenager raised her arms in triumph and then crossed her heart as the fans in the stands cheered. Unfortunately, Kosgei finished in a distant fifth clocking 10:06.46.

Cherotich’s win came only hours after Damaris Mutunga won a silver medal and set a new national under-20 record of 51.71 seconds in the women’s 400m.

The race was won by British athlete Yemi Mary John, who crossed the line in a seasons best of 51:50. Mary John was cruising in the last 200 meters and injected more pace in the last straight, securing her country’s first gold medal in Cali.

At the line, Mutunga came agonisingly close to finishing third but through grit and determination, the Form Three student at St Martins Secondary School in Masinga, Machakos County saw off India’s Rupal to add to Kenya’s medal tally.

Heading into day 5 of the championships, Kenya sits second in the standings with a total of six medals (three gold, one silver, two bronze) behind United States of America with ten (five gold, two silver, three bronze).

Uhuru likens Ruto to untrustworthy conductor who can cause an accident